Architecture meets interiors in this project developed by the Arclinea Flagship Store in Brussels. Townhouse DT is an exclusive residential building designed by Juma Architects, a Gent based architecture firm founded by Mathieu Luyens & Julie van De Keere in 2009, with a focus on creating well-crafted and custom made structures. Their aesthetics are modern and minimal with careful usage of light, space, emotion. For the kitchen, they chose Arclinea. Let’s meet with the studio. COULD YOU DESCRIBE YOUR ARCHITECTURAL APPROACH TO THE RENOVATION OF THIS OLD MANSION IN BRUSSELS.
The old mansion in Brussels had already been completely dismantled inside when we were asked to renovate and expand it. In fact, we were the second architectural firm to be commissioned for this project. The previous architect had already stripped the building and carried out a number of structural interventions. However, the client was not satisfied with the design and asked us to take over the project. As a result, a lot of structural work had to be done first. With the exception of the foundations and the swimming pool, the entire rear of the structure was again demolished.

WHAT’S THE POINT OF BALANCE BETWEEN ITS OWN ORIGINAL STYLE AND ARCHITECTURAL CONTEMPORARY INTERVENTION?
The kitchen was planned on a lower level which made this one of the biggest interventions at the level of the rear construction. At the old level, the kitchen seemed rather separated and less accessible. By bringing the level back to the same level as the living room, this was brought back into balance.

WHAT ASPECTS OF THE ARCLINEA PROPOSAL DID YOU FIND CONSISTENT WITH YOUR PROJECT FOR THIS HOUSE?
One of the client’s most important requirements was to bring as much light as possible into the house. Therefore, 3m80 high windows were introduced. This also implied a change in style, so that we conceived the rear of the house in a contemporary way. So, we had to find a balance between the original style of the old house and the modern style of the rear extension. This also made it clear to us that the kitchen had to be given a contemporary look. So Arclinea’s kitchens seemed like the right choice to achieve this. Normally we always design custom kitchens, but the client preferred to work with a specialist kitchen builder. So within the high-end range we found that Arclinea scored well.

DO YOU THINK THE ROLE OF THE KITCHEN IN THE HOUSE HAS CHANGED SINCE YOU WERE CHILDREN? HOW IT CAN EVOLVE IN THE FUTURE DECADES?
It is clear that the kitchen has increasingly taken on a central role. both physically and within the family. The living kitchen has become a real concept and for many people this is a real must have in their home. However, we have noticed that the kitchen located in the living space is gradually losing its popularity. With JUMA architects we also design living kitchens, but they are in a way separated from the living space.

TELL US SOMETHING ABOUT YOUR MATERIAL BOARD.
Although the client made relatively safe choices regarding the materials and color palette, we were able to convince him to use brushed steel. A material that leaves its unmistakable mark on the kitchen.

WHAT DOES LUXURY MEAN TO YOU?
The perfect balance of place and tranquility.

WHAT DOES HERITAGE MEAN TO YOU?
Something that shouldn’t just be removed. Each period has its specific way of building and this should be respected. 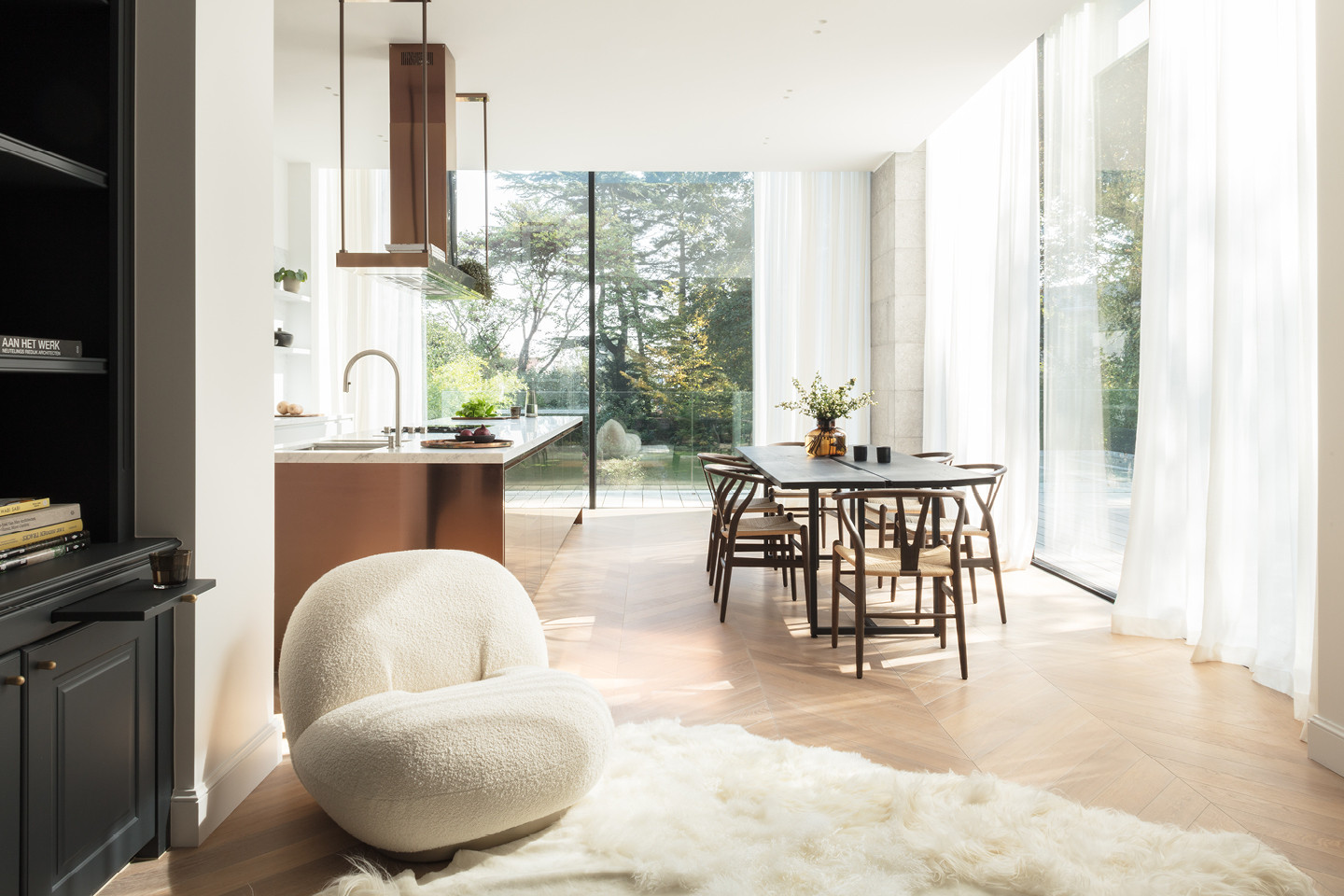 Seemless interiors, the kitchen flows into the living room and seems to be connected with the beautiful garden. The model is Convivium by Arclinea: the kitchen becomes the focal point of the space, thanks to its refined, elegant island and single shelf in bronze PVD with hood with remote motor. Satin grey with grooved handle for the doors of the wall of tall units. 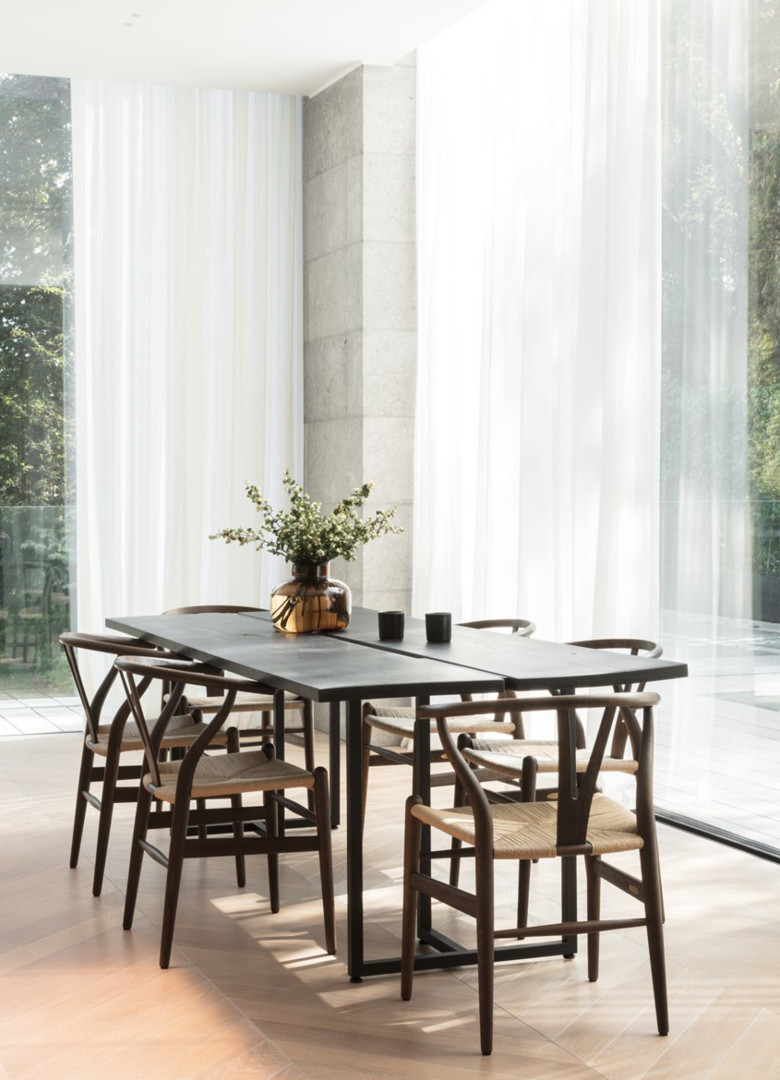 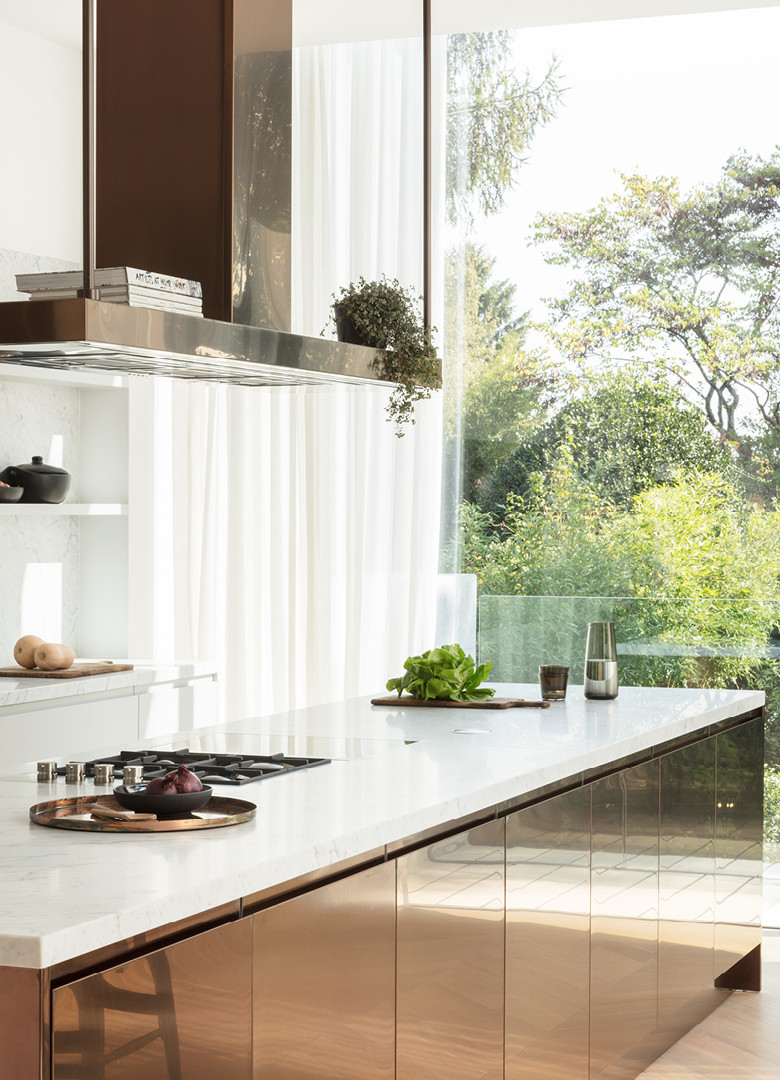 The classic mouldings contrast sharply with the stark architecture of the rear façade, whose main function is to let as much light as possible into the house. This was successfully achieved through the installation of 3,80 meters-high 'minimal windows' in the kitchen and living room spaces. 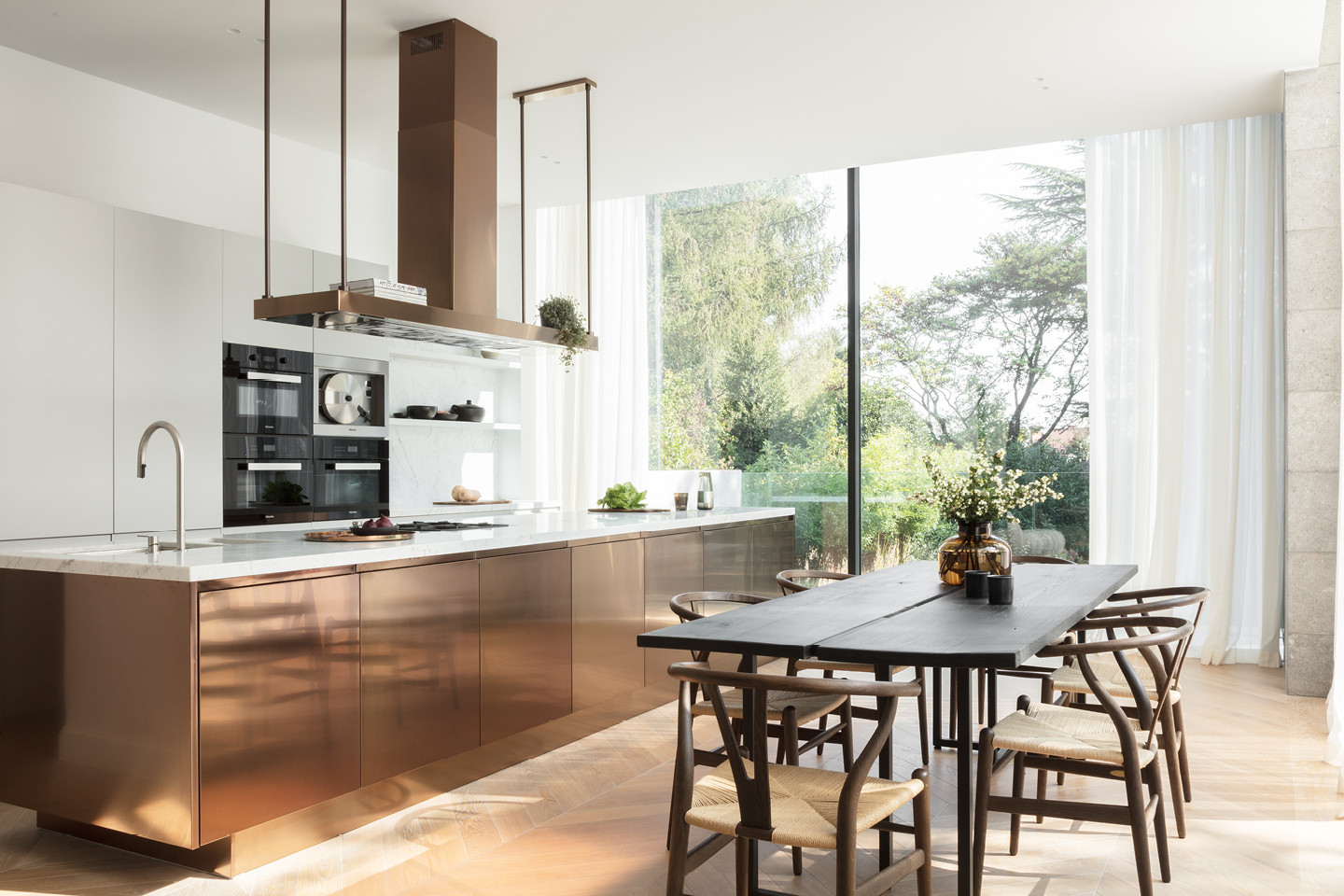 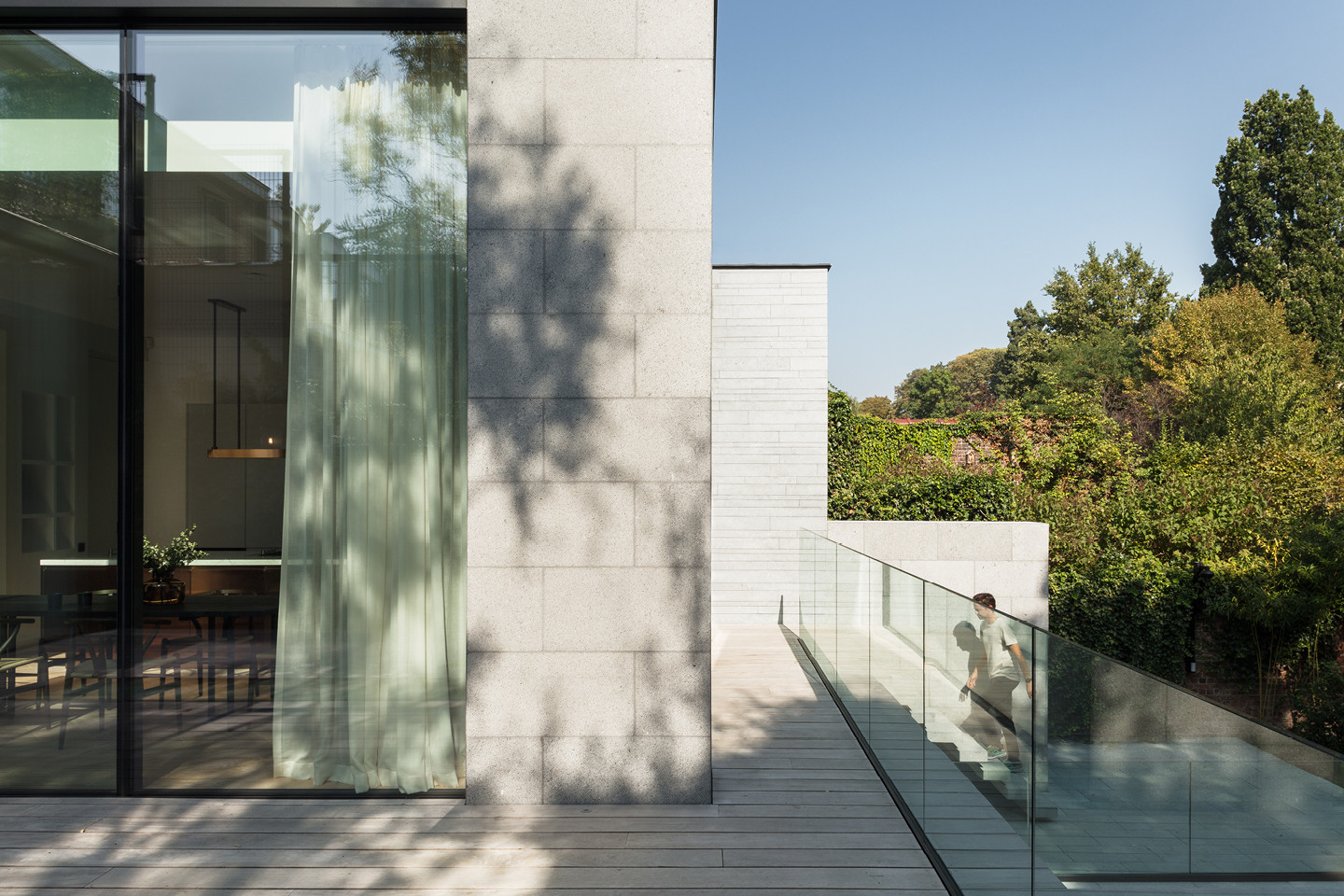 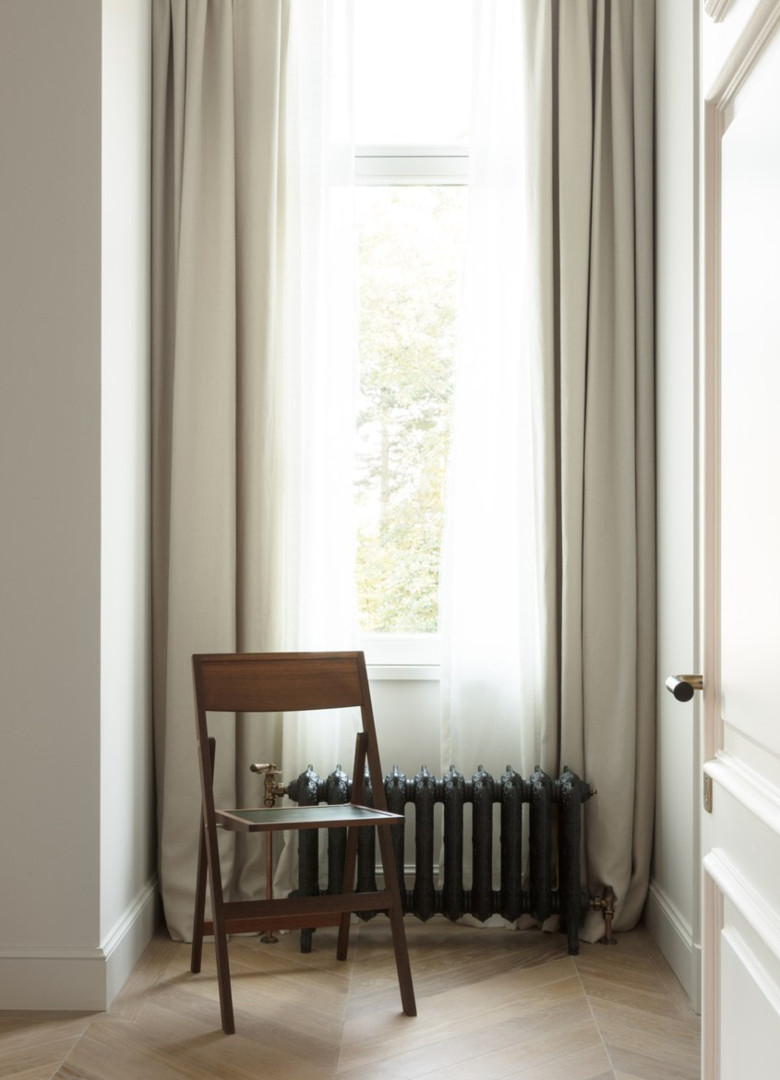 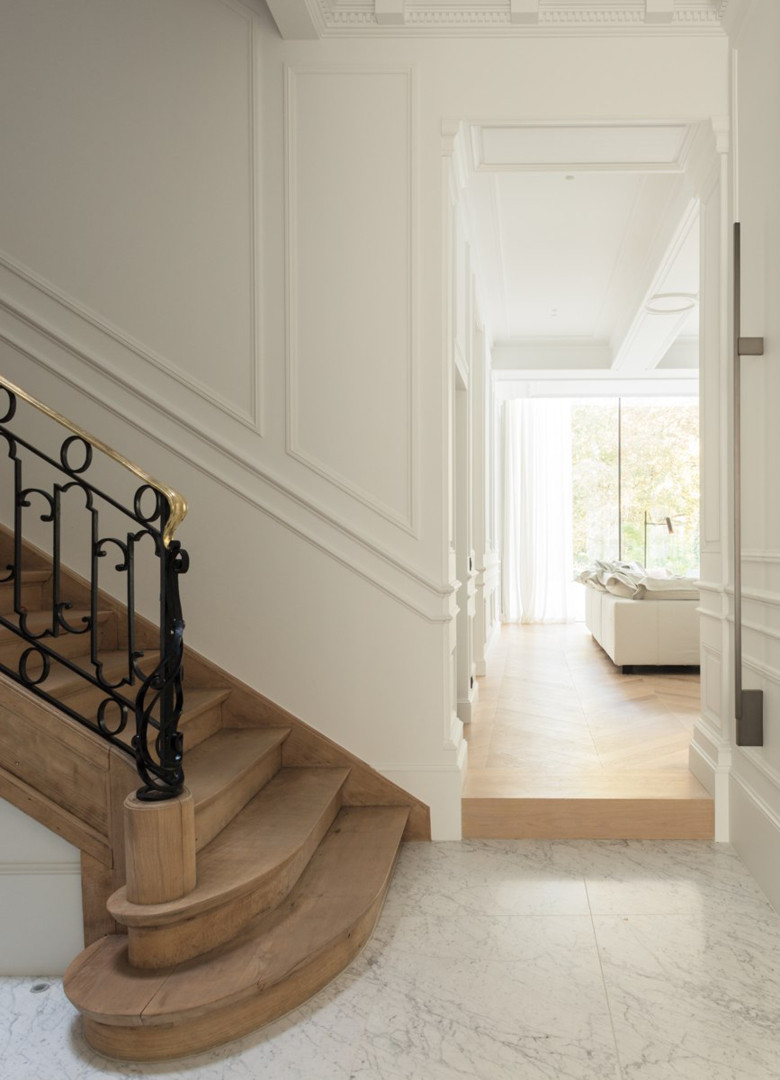 The entire first floor was furnished as a master bedroom with its own dressing room, bathroom and desk and includes an extra space for another room and/or study nook as well. On the second floor, there are four other rooms with ensuite bathrooms. 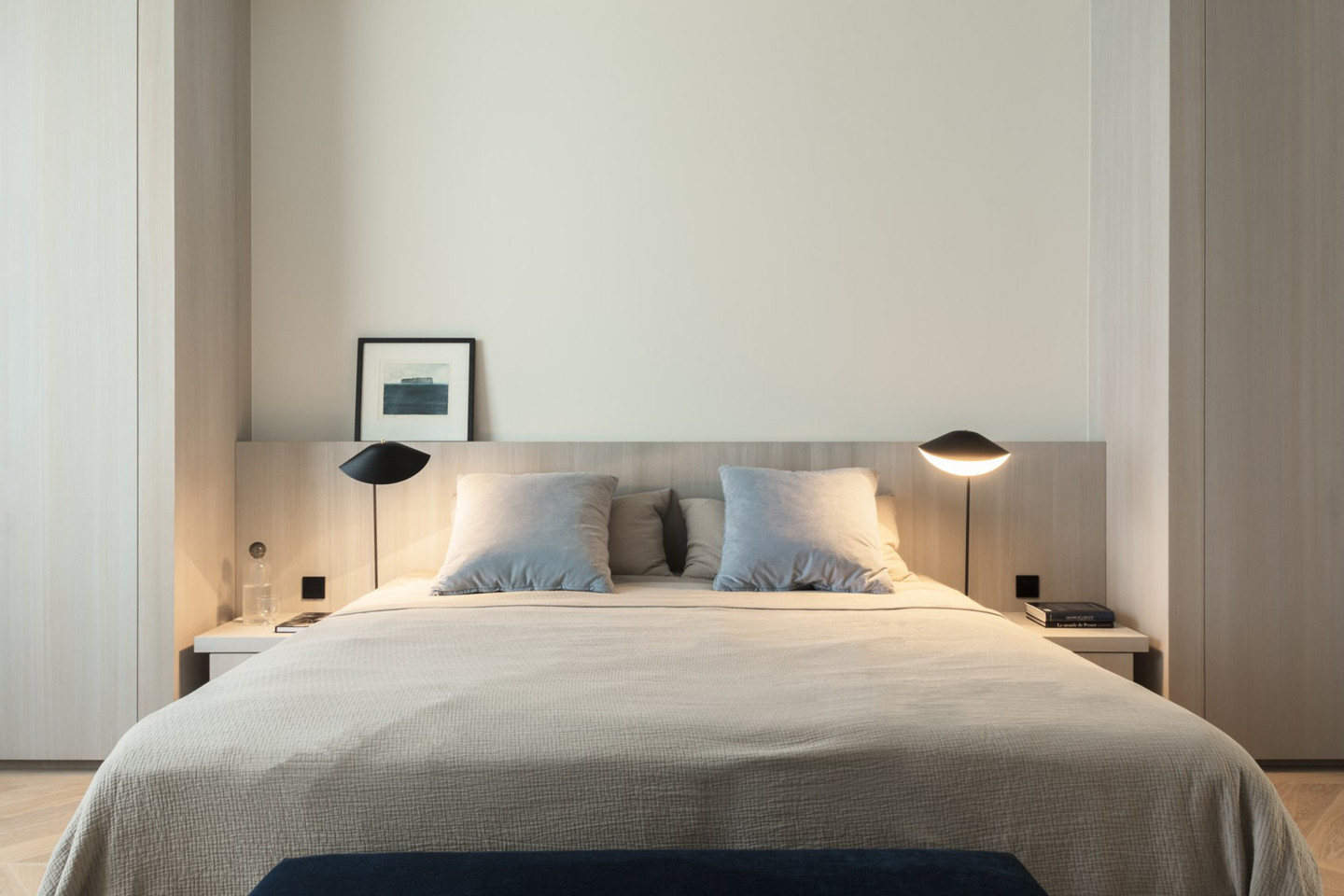 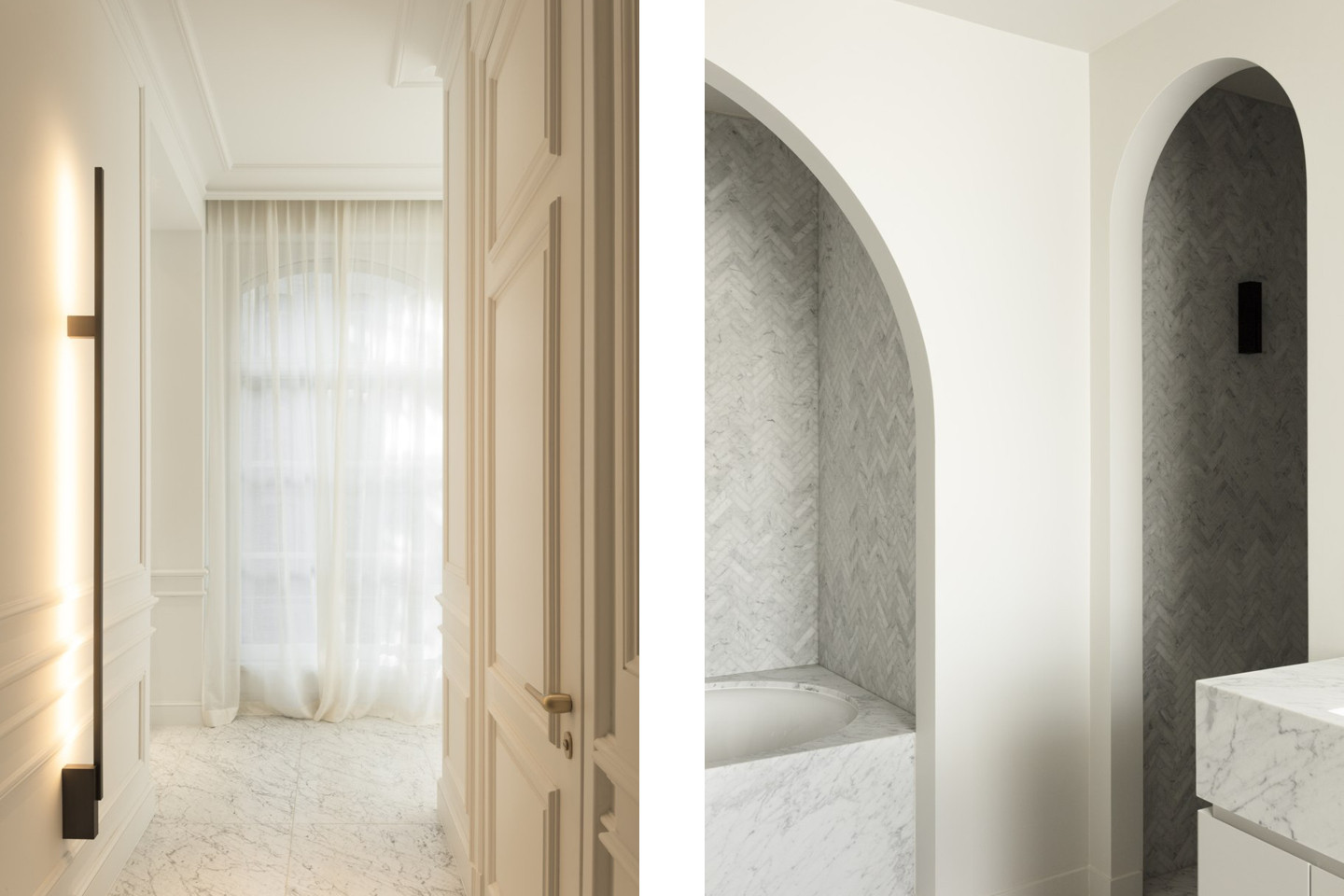 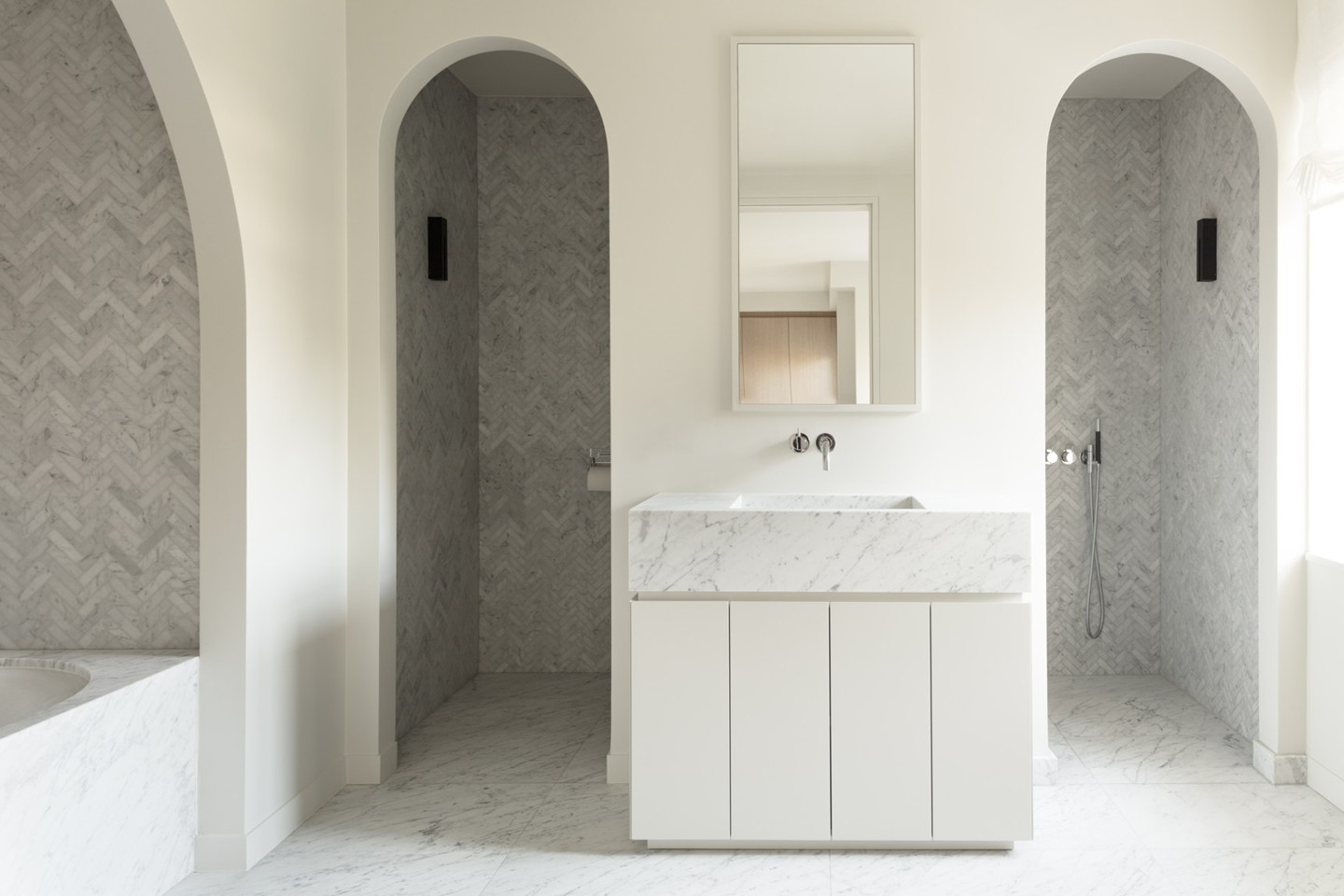 Ample natural light had to be drawn into the basement level as well, as this space houses a fully equipped spa, replete with a 15,5 meters-long indoor pool, a sauna, a massage room and a gym. Four large skylights cut into the upper terrace floor illuminate the pool. By lowering the terrain, it now seems as if one could swim straight into the garden. This intervention has also made it possible to install large window sections, giving the multifunctional fitness space a better connection with the outdoors. 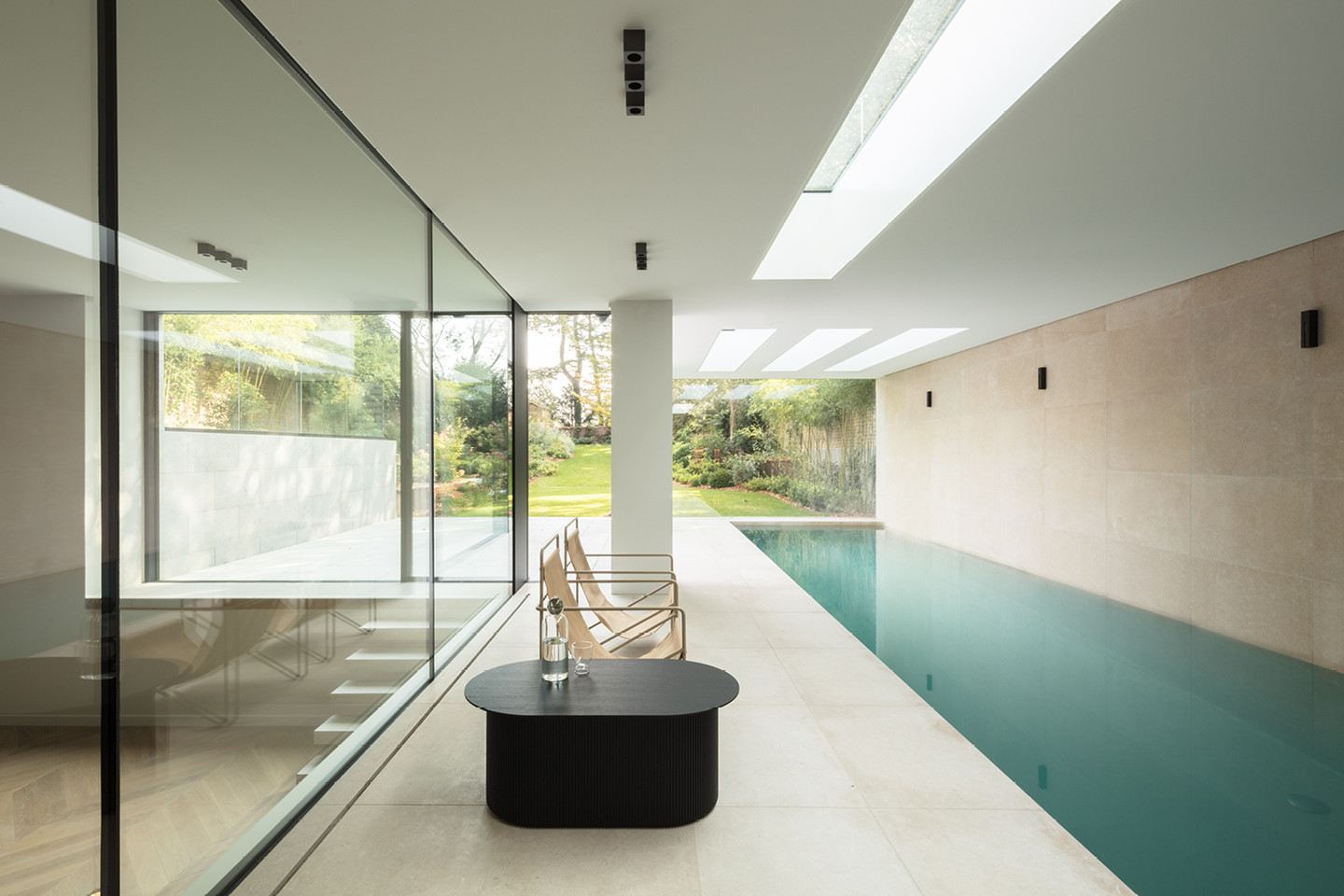 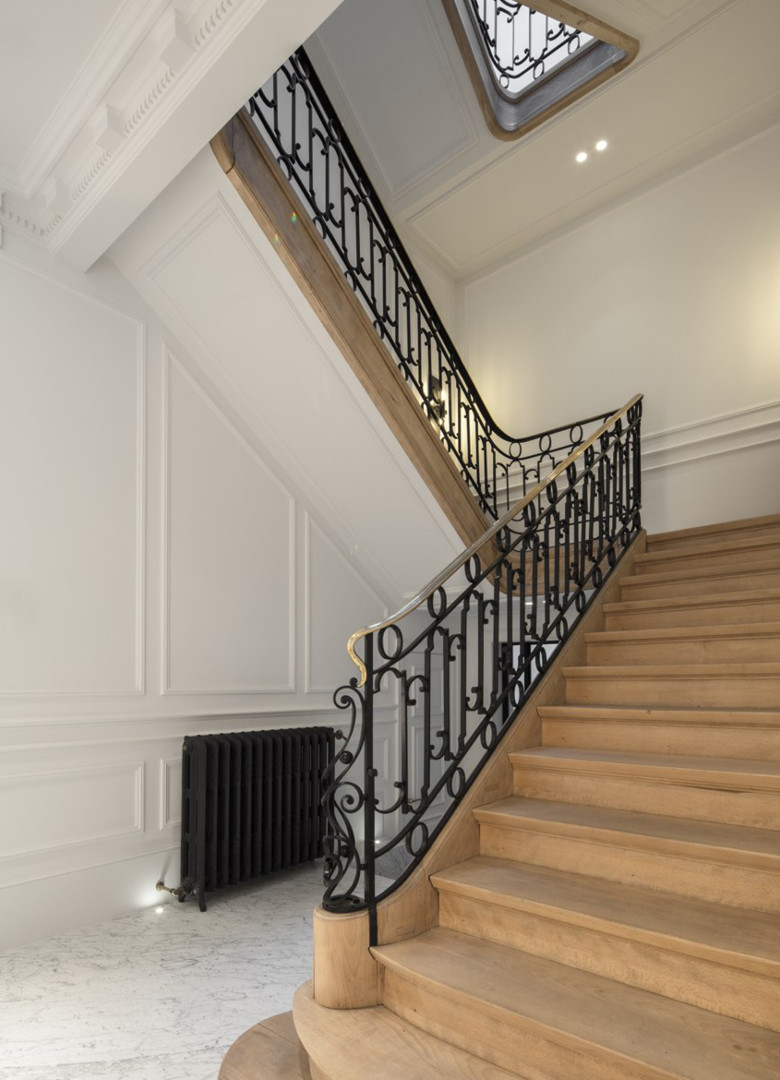 I consent to the processing of my personal data for commercial, promotional and advertising communications and activities by Arc linea Arredamenti S.p.A. and Design Holding S.p.A. as joint controllers. I acknowledge that I may withdraw my consent at any time.

I consent to the processing of my personal data to create customer profiles for direct marketing purposes by Arc linea Arredamenti S.p.A. and Design Holding S.p.A. as joint controllers. I acknowledge that I may withdraw my consent at any time.

I consent to the processing of my personal data for commercial, promotional and advertising communications and activities by the companies of the Design Holding Group as joint controllers. I acknowledge that I may withdraw my consent at any time.

I consent to the processing of my personal data to create customer profiles for direct marketing by the companies of the Design Holding Group as joint controllers. I acknowledge that I may withdraw my consent at any time.